Drawn to the Horizon

Co-curated by Ruth Jones and Sam Mogelonsky, this exhibition features 79 artworks from 39 Canadian artists, as a gift to the AGN and to the public. As a collector and supporter of the arts from an early age, Ronnie Kaplansky provides us with a glimpse into the collector’s process with his discerning eye and enthusiastic spirit coming together in a collection displaying the wonder of a life spent fixed on art’s endless horizon.

Nearly sixty years of accumulation driven by an emotional and aesthetic response to each work, Kaplansky presents a unique dialogue between artists and viewer. 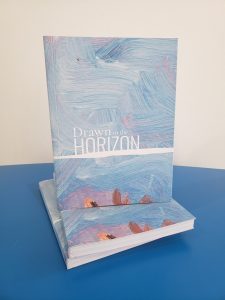 A catalogue is available for purchase at the Gallery for $15.

The arrival of new works is an exciting event for any gallery or museum. They are an infusion of life and a way to start new conversations with the works already in a collection. This is the situation the Art Gallery of Northumberland (AGN) finds itself in as it prepares its summer exhibition, Drawn to the Horizon, which will run from August 31 to October 30, 2021. The show, which Sam Mogelonsky and I curated, consists of a selection of works from the 106 by Canadian artists that collector Ronnie Kaplansky is gifting the gallery. From a series of small etchings of bridges by Ontario artist Hugh McKenzie to striking canvases by the painters Susanna Heller and Linda Martinello, the pieces are, for the most part, small in scale. Many are works on paper, and they range from the fully resolved to the embryonic, evidence of their artists’ thought processes as they play with ideas and test techniques. They are vivid additions to the AGN’s collection, extending its artistic vision.

They also capture something of the person, Ronnie, who originally brought them together. We often think of collecting as a solitary activity. After all a collection, whether of artworks, rose bushes, or quirky salt and pepper shakers, reflects something of the person behind it: the art collector guided by the lessons he learned in art school, the rose fanatic who remembers being enchanted by a garden, the lover of pepper shakers who admired a grandparent’s quirky sets. But collecting is social. It involves immersing yourself in the world that circulates around the objects you desire: of fellow collectors, specialists yes, but also the owners of antique stalls, horticulturalists, gallerists, artists, friends.

This observation would seem obvious to Ronnie. It was his parents who introduced him to collecting art, and he tagged along to exhibitions as an eager adolescent, watching the way they fit art into lives anchored in community and infused with their commitment to politics and social causes. These experiences led him to the Ontario College of Art, where he studied graphic design. When he graduated in 1963, he started a collection of his own, acquiring three pieces, one of which, a gouache watercolour by Canadian painter and war artist Will Ogilvie, is in his gift to the AGN. Over time, that collection would grow to several hundred works that he has, over the last dozen or so years, begun to make part of other collections, gifting pieces to public galleries. Collecting, for Ronnie, has always been social: Saturdays spent dropping in on gallerists to chat about a show over coffee. Evenings and afternoons at openings – like the one where he met AGN director Olinda Casimiro – charged with the excitement of seeing new work.

This sociability something shared-creates connections between the works in Ronnie’s collection, bed their similarities in aesthetic or style. There is the landscape by Will Roberts, an accomplished painter and one of his teachers at art school. Over a dozen pieces, mostly etchings and watercolours, by Hugh Mackenzie attest not only to an appreciation for that artist’s expressivity and technique but also to a deep friendship-the two still talk regularly. And alongside those Mackenzie’s are works by his students, a whole generation of younger artists, Linda Martinello’s ethereal, abstracted landscapes are beautiful and linked to Susanna Heller’s precise drawing and visceral painting through Olga Korper, the Toronto gallerist for whom Martinello worked for a time. Ask Ronnie, and he’ll tell you about the three of them – him, Korper, and Martinello-sharing croissants on a weekend morning

We have been missing these connections during the pandemic, small exchanges that link us to new worlds and expand the ones where we feel at home. As we get ready to hang the exhibition, seeing their evidence in the works is a comforting reminder that those worlds do exist. They brought these works to the AGN – Ronnie and Olinda commiserating about art and the regional galleries that act as its custodians and connect it to communities, a conversation that turned into so much more. Now that these works are here, they’ll connect to new people; gallery visitors, staff, and researchers, this year and for all the years that follow.

As collections grow, they don’t just increase in number. They accumulate layers of meaning and connections: between artists, between styles, between subjects. All the people who touch a collection animate it, preventing it from becoming static, keeping it alive. Ronnie Kaplansky says that he didn’t set out to be an art collector: “I just got myself outside, and I would see work and galleries and I would say to myself, “Well, this is beautiful.” It seems fitting to welcome his gift at a time when just getting outside really does feel like something remarkable. The almost forgotten joy that comes from being in the world, seeing something beautiful, and making new connections.

The Gift of Ronnie Kaplansky