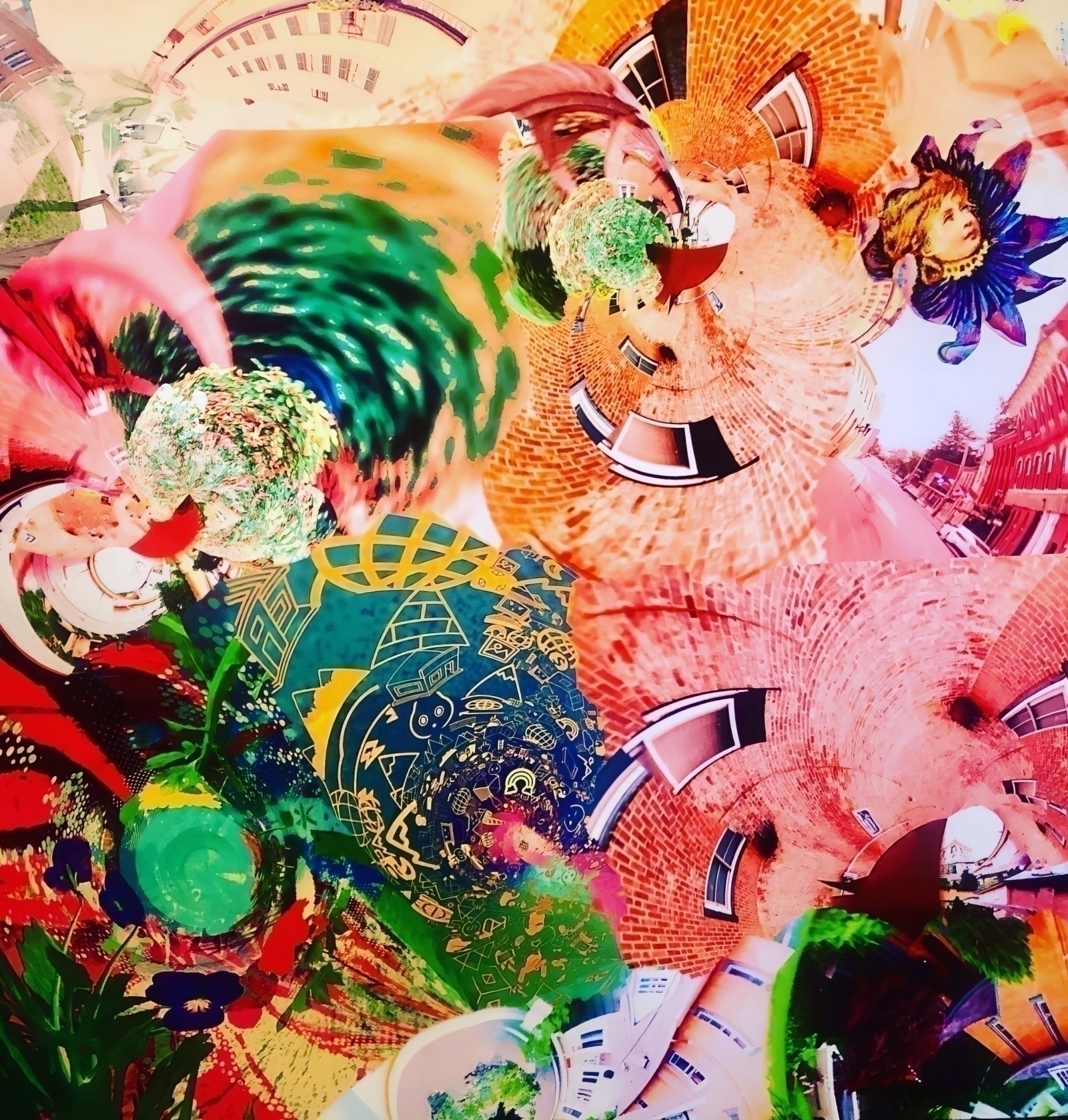 Oli Goldsmith’s performative and expository artworks, brings to us all, as audience, worlds as playful, transitory and evocative as the images, words and phrases in them.

The Sworls adapt a sense of place using a 360-degree panoramic camera. This camera actually consists of two 180-degree cameras. The act of stitching or threading together the various image fragments results in a re-invention of visual space using physical place as a metaphor for the ways we perceive our place in space in today’s world.

Further innovations involve “wrap around” images that extend the swirling sensation. This is a visual conundrum we are a part of as viewer/voyeurs. Up to 100 images are thrown into a single composite work. These include mesh areas. The staging’s are themselves an act of discovery, as the work evolves out of the direct experience into a garden of visuality.

Holistic inversions create a multi-sensory experience as we try to read these images, we engage with them. The Sworls are a form of storytelling that draw on an era of visual and auditory overload. Reality is a mere point of departure, and distraction and extension are reconvened into a worldview that suggests immateriality can be a process in and of itself. In other words, the image is never complete, nor is it a representation per se. Our look at, or engagement with, these works re-presents an anatomy of processes involved in new technology. There are paint-like swaths of colour, textured by details, while within the holistic warps in these works, we see fragments of the point of departure, streetscapes of Port Hope, Ontario. Oli Goldsmith’s Sworl works are not truly panoramic at all. They are actually pan-presentational. As reality fragments are copies, and whorled like the bark of a tree has whorls, the Sworls engage in the act of presentation as a visual performative dance of life.

Stretching perception is visual yoga that causes a reinvention of subject and object, distancing us from what were once called abstract or realistic works, if ever there were such places. And so, constructs themselves are revealed as visual phrasing, but pluralistic phrasing as well.

Whether the more spare symbolic iconic constructs or the works consisting of hundreds of cues, a thousand images, if you will, or stickie-like attachments that layer and build their way into becoming an artwork, Oli Goldsmith’s art contains a million different seemingly nonsensical clues and cumulative cues. Often, they are drawn from the everyday and synthesize word and visual fragments to build a lexicon of visuality. The meanings are part of our everyday mythologies, invented out of an age of consumption that is evolving into a less Materialistic vision. Jarring angles subvert the spaces where worlds collide in a relativistic way. Macrocosm begets microcosm, and the depth is in the ways we interpret meanings.

Other works depart from the Sworls, and they have a near ancient symmetry, and these images are simplified but loaded within with icons, symbols, and images. The contexts these works reference can be science fiction, animation, visual splicing, archaic yarns, or suburban garden myths. Hierarchies, when simplified, explain the very processes of invention and explication that exist within our complex hyper-stimulated and saturated realities. These artworks are made for us to delight in. We rejoice in the inane beauty of worlds within worlds, ever expanding or contracting visual worlds that look as if they were drawn form a child’s garden of visual verses. There is even a neo-Victorian aspect that recalls the limericks of Edward Lear, or stories that build and achieve their narrative through the very telling. The sticker or the tattoo – all sensations – are interspersed with word fragments like “Old,” “Maybe its Jargon”, “Edge”, “Shoreless”, “Missing Reward 1) Fryer Tuck”, or simply “Dermitt” (an allusion to Kermit the frog, a Muppet character who left Sesame Street after its 1st season).

Between the robots, the horses, and cornucopia of animals and images of people we wander mis-directed into a land of adventure and discovery that is uniquely Oli Goldsmith’s. His early forays into animated video and visual design (album covers for Our Lady Peace and other such productions) achieved a string of awards including YTV Achievement Award, Toronto Protégé Honours Arts Award, and several MuchMusic Video Awards. With his early Video experiments Goldsmith’s walking figure could be seen throwing flapjacks in the air while passing animal warning signs and the stretching erratic locus of uneven scales goes out the window and escapes the screen analogy… Pop and post-Pop art has obviously influenced Oli Goldsmith’s art style as it has evolved into a kind of vernacular parables on today’s Canadian experience. This life “experience” interacts with two very different kinds of perceptual worlds – the world wide web’s and the physical and natural world’s – both are alluded to in all of Oli Goldsmith’s weird, dastardly, and wonderful creative process and art.

As hyper as hyper can be, collaging becomes a way of referencing one’s experience, a kind of autobiography of experience in a mad mad world. The disconnect begets the extended riffing on what could be meaningful or meaningless. It is a game that’s rife with irony. The synesthesia in Oli Goldsmith’s paintings impacts us immediately. Art is not contained or inscribed by the constraints of “good taste”. Even more satisfying is the complete abandon, the refusal to let concepts dominate the process or final composition. Art exists in a perpetually fluid state, where each “stream of consciousness- like” element becomes a point of departure for other elements….

The visual interstices of these paintings refresh our overloaded informational anxiety by loading as much as possible into these paintings. All the elements relate, like so many permacultural stickers. They country the physical with ephemera, combinative digital transfer and traditional paint techniques, photo-collage and still other visual additives – custom vinyl cut elements, silkscreen, stitching, threading and paint types that include incandescent, metallic and new kinds of ﬁnishing topcoats.

A million cues… visual devices… all intertwined and layered become a technique, a way of painting beyond parameters and in these peripheries an artist’s language is born. The frames of reference are woven with symbols and icons. Underground or above ground, these visual mappings of experience are a forest growth inhabited by species and fauna and flora of the artist’s imagination. It is an amusing and fertile ironic iconic world that extends beyond the parameters of visuality.

Oli Goldsmith’s ever-evolving artworks are as transitory as the images, traces, and effects we see in each of them. Images are presented as if the sprockets of these filmic scenarios were threaded in a perennial way to be part of an intergalactic romp – the ever in forever.